1. Given the current Covid virus pandemic, It has been difficult for camps to meet in an in-person setting at their usual meeting places. The virus has surged again in several areas and the pandemic will likely continue until an effective vaccine has been developed.

2. For the protection of our Brothers in the Department of Tennessee, electronic meetings using media such as Zoom are authorized so long as the pandemic continues. This is in line with the National Organization’s policy.

3. This General Order does not prohibit in-person camp meetings. It is meant to give camps an option to use electronic means during the course of the pandemic and will remain in effect until rescinded by General order.
Ordered this 25th Day of October 2020.

When it’s virtual – the photos are few… 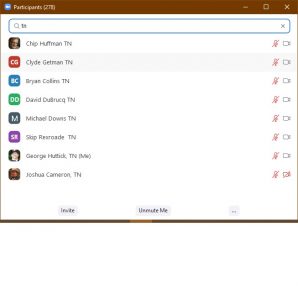 Brother Shawn Ernest Atchley, of Waynesboro, Tennessee, passed quietly from this life on Wednesday, 26 August 2020, at Vanderbilt Hospital in Nashville.  Following medical evaluation he was admitted to Vanderbilt on 30 July where he was diagnosed with Coronavirus and died on Wednesday.  Shawn was born 5 October in Flint, Michigan and moved with his family to central Tennessee.  He is survived by his wife, Jane Wiley Atchley, his father, Ray Atchley, of Lawrenceburg, Tennessee, his brother Bill Atchley and wife Lisa, of Flushing, Michigan, and his sister Sandi Smith and her husband James Smith of Collingwood, Tennessee, and their children Steve, Connie and Stacey.

Shawn was a funeral director and was employed at Shackleford Funeral Home and at Discount Med Ware, both in Waynesboro.  He was a leader in Cub Pack 366 in Collingwood, Tennessee.

Shawn joined the SUVCW and was a charter member of Farragut Camp 1, Selmer, Tennessee at their organizational meeting at the historic Ross House in Selmer in December 1995, and served in most of the offices until the camp closed in 2016. Upon the surrender of the camp charter he transferred to Sultana Camp 1, Memphis, Tennessee.  Shawn was a charter member at the organizational meeting of the Department of Tennessee in Jackson, Tennessee, 20 April 2016.  He served in each of the department offices and was elected Tenth Department Commander 20 January 2005.  Shawn was well liked and respected by all who knew him.  He called each of his colleagues a friend.